Loading SWF for the first time...
Adobe Flash is required to run this project in the browser. Enable Flash

Click and drag to manually intervene, if you must.

I think the rules are that each colour has a reaction to each other colour:

I think that's all the rules, but I'm not totally sure. Anyway, enjoy!

This is so extremely similar to what I've made in Algodoo like 5 years ago! The big difference is that it had tracers on everything (showing the recent path took by that particle). I don't think many things repelled each other, actually but I remember I had: reds that like to couple up in slow clusters, probably repelled most other things, smaller blues in faster spinning clusters, really fast greens, which tried to catch a blue and that made it look like a fast cyan swirl, tiny ludicrous speed yellows that bounced around everywhere and, last but not least, one big "black hole" that had massive attraction, somehow things didn't really stick to it but rather spun around it, especially the little yellow ones and that looked really cool (I suspect the yellows were actually hitting everything else near the surface and that's why nothing got stuck). It was much much more active than Everybody but each particle was fixed size and didn't wobble, only spun, so it looked less organic than Everybody.

I hope I find my project somewhere.

And I did find it! It's actually a lot less pretty but also a lot more interesting than I remember! Some screenshots, where tracers show recent path (too lazy for a video/gif)

It's hard for me to tell quite what's going on but it looks/sounds like it could be really cool. Gonna upload more anywhere? 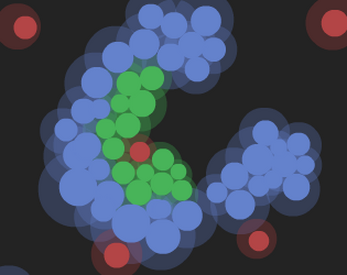