I tried to make this in under 1 hour but I hit a snag on building the curved tiles. Under 2 hours is still OK!

My first game for this year's Variety Megajam

I could see the possibility for lots cool maneuvers (e.g. jumping into the corner of a tile to gain more vertical velocity than you would from running up its curve), though I was not skilled enough to pull them off when I was trying. I couldn't even get the point of the ^, so maybe I should focus on training the fundamentals. I would love to see what a experienced playthrough/speedrun of this looks like!

It felt pretty unique in that I can't remember a game I've played that actually felt like it was about the physics rather than being about a ruleset with physics as noise. I guess the common practice in physics puzzlers and platformers is to discretise things for the sake of the designers and players and this is in brazen ignorance of that. Maybe that's a ridiculous thing to say, but I've gotten a similar vibe from some of your other stuff and I feel like I understand them a bit better having played this.

Are you supposed to be able to run up walls?

I can get most of the bottom rings by charging at a wall and jumping at the last second to bounce up, but it feels like I’m missing a charge up speed button that would let me use curved ramps to run on walls and ceilings.

As far as I can tell it’s just wasd + space?

this is the dark souls of sonic games :P

also, wow you made a game for the jam already!!  congrats

I did it and ate all them rings yum

Okay, now that I've stopped rushing to get this done and taken a sec to play it, I have decided that this is less of a game, and more of a super rough tech demo! Still, enjoy the messy challenge! 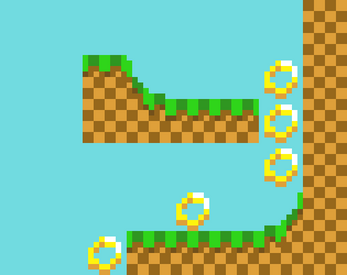