It was an interesting short game. :) I was a bit disappointed that nothing interesting happened, though...

Is it suposed to end when returning to the wedding?

I didn't see the end prompt until after finding the machine, so I viewed it as an amusing punchline recontextualizing the player character's situation.

If this were a game level, then the level design highlights the machine as a point of interest: jutting out of a flat field, the path toward it highlighted with three bright circular stones offset from the main trail. The machine itself feels like it's setting up the opening puzzle to an adventure game: unlabeled buttons, locked hinge, a warning on what to do before opening it. But it isn't a puzzle! It's just some inexplicable part of the real word, a configuration of physical objects fascinating enough to pry the player character away from a party, to forget whatever they were doing before and instead dedicate their whole focus on investigating this electric panel as if they *were* in a game. 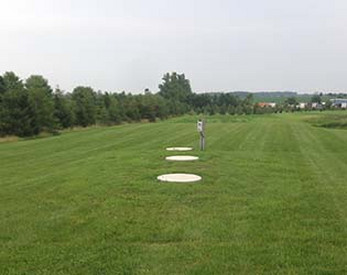