A downloadable cruel world for Windows, macOS, and Linux

Learn how a platformer controls like you've never controlled a platformer before! Enjoy unparalleled freedom (roll and bounce and do weird shit!), and a thousand opportunities to klutz yourself into a pit of spikes.

I'm in love with the image of a game and a terminal side-by-side, and I finally got it working in Cruel World-- HACK, MINE, and KISS various objects in order to be allowed to save your game, to unlock doors to otherwise inaccessible places, and to read descriptions of the mechanics of the game itself.

The world has already been ruined by OWNERS -- it's time to take it back. Throw a PARTY at a private node, and everyone gets access as long as the PARTY keeps on rolling. Let's  celebrate the end of the end of the world together!!!

Architects of this cruel world

And of course the hundreds of players who have HACK'd, MINE'd, and KISS'd every corner of Cruel World, turning it into the living landscape it is today.

In order to download this cruel world you must purchase it at or above the minimum price of $6.66 USD. You will get access to the following files: 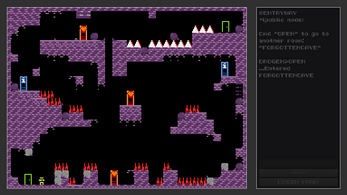