Thank you for bringing Cruel World to life.

Cruel World was nothing without its players. Despite the tongue-in-cheek-but-not-really criticism of the OWNERS, this genuinely wouldn't be a place that feels like it does without you. I've always wanted to build a game that generated stories of groups of players connected across the internet. And though Cruel World was short-lived, it was a beautiful flash in the pan, a thrilling blue-hot hub of activity for a brief moment. I want to thank everyone who played and who made the experience real.

Cruel World came out exactly 66 days ago, and by some inexplicable coincidence it's June 6th, AKA "6/6", today.

So, I knew I had to do something. Maybe I shouldn't have meddled as much as I did (updates to the Cruel World?! did they make it better?), but I don't regret it! It was fun, even if I was tampering with a world not wholly my own :)

Sylvie, who recently released her game Clockwork Calamity in Mushroom World: What would you do if the time stopped ticking?, designed a handful of brand new super-hard and super-good levels. You can find them inside TEETH_SHRINE. They are definitely for experienced Cruel Worlders, but if you can figure out how to get in there, you're probably well-prepared for what's inside. 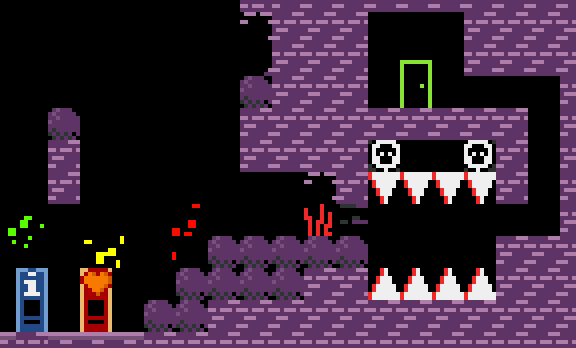 the entrance to a sylvie world, please come and visit, a straight forward gauntlet with no secrets

A new game mechanic for newcomers.

One of the worst things about Cruel World is also a core part of its experience -- the first players had the best time with the game, and nobody who starts up the game for the first time will have quite that experience, ever again. Of course, if you're very quick you can explore Sylvie's new frontier, but I've also added the ability to throw a PARTY at a node.

Anyone with access can HOST PARTY at any private node, and then for the next several hours everyone is equal: nodes with an active PARTY at them are public, and OWNERSHIP is temporarily abolished.

A huge PARTY, together.

In short: the world is bigger, it's easier to help each other, and I hope this will help bring a little life back into Cruel World, for a time :)

Please feel free to share secrets or coordinate a PARTY in the Cruel World community forum, or in the #cruel-world channel in my Paradise discord!

P.S. Here are a few historical Cruel World links to browse while you HACK, PARTY, or WHATEVER! Feel free to comment with any links I might have missed.